Bees and Borage in Brooklyn, Oh My! 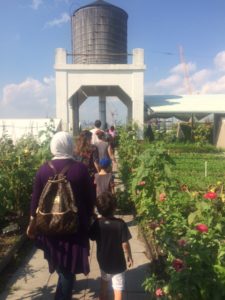 There was a heat index of 105 degrees but on the grounds of the world’s largest rooftop farm, a strong breeze was blowing and soil shifted slightly in the sunlight.

Our group of Allergic to Salad students got to explore nearly every corner of this magical farm, housed atop a large warehouse in the Brooklyn Navy Yard. Spectacular views of the Manhattan skyline belie the luscious greenery that surrounded us.

We learned about pollination and the importance of honey bees through a hands on activity, and got to delicately handle the worms winding their way through dark bins of compost. We fed their small flock of chickens an array of fresh vegetables such as wood sorrel and purslane and heard the story of one hen (maybe it was “Chickira?”) flapping off the side of the farm only to be found, two days later, crouched on a lower roof, ruffled but unharmed. 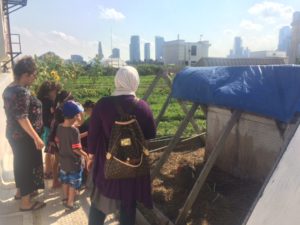 We sampled herbs and vegetables from their demonstration patch including lavender, stevia, mint, lemon sorrel (tastes like sour patch kids), ground cherries (a relative of tomatillos), and lemon cucumbers (they look exactly as they sound.) We also sampled the fuzzy purple borage flowers that taste astonishingly like cucumber. 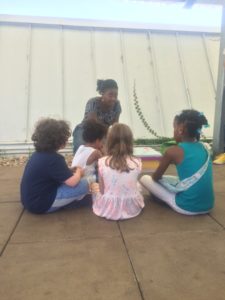 A big thanks to the Brooklyn Grange for having us, and serving as an incredible example of what perseverance and vision can create. Working within some pretty stark limitations, they’ve created incredible bounty.

Sample some produce for yourself at one of the Brooklyn Grange markets: Saturdays 11-4 at their location in Long Island City and Sundays 11-4 at McGolrick Park in Brooklyn.

It’s not too late to sign up for our tour of the Terri Kitchen in Long Island City on Thursday, August 24th. Get your tickets today!