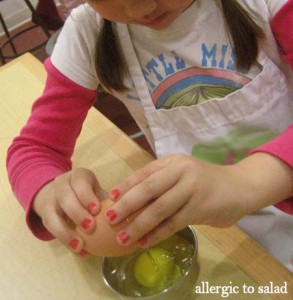 My students year is awkwardly broken into two semesters. Awkward for the children, who in elementary school, cannot really grasp what a semester is and how it changes their schedule. (Though they more or less agree to be herded wherever we take them.) Awkward for the teachers because the semester falls during the last week of January, hovering between winter break and a mid-winter recess. Awkward because unlike a traditional semester end, there is no break to signify the changing of the semester.

Smack in the middle of the week before the semester changes, we hold an end-of-the-semester-party. It is a showcase of what all the clubs worked on throughout the semester. Ceramics and art post their work to view, dance clubs perform their pieces, film club plays their clips and my cooking club caters the event.

How do you get seventy-five kindergarten through fifth graders to cater an event?

When I started teaching I was not told immediately about the party. “By the way,” it was thrown in, a couple weeks after I started, “we do an end-of-semester party that your students cater.” This was shortly after I learned that the previous cooking teacher “sorta went crazy” and “just didn’t come back one day.”

The better responses came, after the notion of catering with kindergarteners, semi-settled in, when I asked how many we were expected to cater for. One estimate was 400 people. The next was 100. Another was 250.

I hunkered down, planning a semester menu that might make sense in a catering world– if that exists for this age group. What came out of it was a menu with my students making bite-sized creations. The catering business turned out for the best– it allowed a tasting-size dish for the students to try new foods without a lot of waste. It allowed maximum hands-on class time (because it’s more fun making 20 small items than one large). It allowed a stockpile of party ready food. That first semester I chose five different dishes that over the course of the semester we would make twice our usual amount. Enough for me to freeze a little more every day of the week, allowing enough for our end-of-the-semester party. (I now only pick four dishes realizing their 250 to 400 person estimate was way off and I’d rather “sell out” during the event than throw food away)

What came out later in the semester was that it would be my fourth and fifth grade class acting as servers during the event. It’s a day my students look forward to– serving people is so much fun for them. And while they might not be the perfect servers:

“Oh! What’s this?” A parent asks while reaching for a nibble.
“Um, I forgot. Hold on.” My student responds, passes the tray to the adult, eats a nibble, retrieves the tray from the adult and responds with mouth full of food, “it’s those spinach fattier things we made. They’re good.” Sometimes in their response, I notice a small projectile fly from my students’ mouth onto the serving plate.

I notice the parent sort of half-smile while they complete their necessary taste.

I sort of half-smile too, call my students over and remind them what they are serving. I also stress that if they want a taste, to do it and finish it when they are not acting as servers.