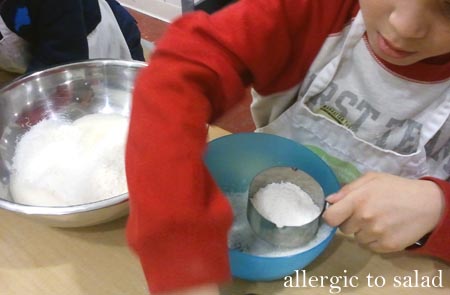 I have a French student in my class. By most accounts he’s pretty much a Standard American Kid (or NYC kid) with his floppy blond hair and NY look, but then he opens his mouth. He doesn’t speak with a French accent, but I’ll say something like, “Cool shirt.” To which he’ll respond, “that’s because it’s French. I got it there.” Oh.

Or I’ll explain something to the class like say, mardi gras, to which he’ll correct my Americanized pronunciation of “mardi” and “gras.” So I turn and remind him that everyone doesn’t speak French and cannot understand. He responds with a slumped back, crossed shoulders and something along the lines of “they should.” So French!

Or we’ll be making a dish with cheddar cheese and he’ll say, “Oh please can we make something with brgheeee.” Saying “brie” with a thick French accent. He’ll then fall into a trance discussing the merits of brgheee versus say… epoisse and the other students look at him like he’s crazy. Yeah, we’ll totally bake with epoisse my kindergarteners would love me. “Really?” No.

He wants to be a chef when he grows up he tells me (or a marine biologist)– “because all the best food is French and the best chefs too.” “What about pizza?” I’ll ask. “Okay, maybe not pizza, but I’m half Italian, so… you know.” So French!

A few months back he came to me begging to make courrghee. “Huh? What’s that?” Curghee? “You know, with chicken.” “Oh, yeah, um… I’ll look into it.” What French dish is this?! I did what any good teacher would do, got home and searched online for all French dishes that sounded like what he was saying. Got it! Duh! Coulis. (I need to brush up on my French listening skills.) Well coulis is a sauce that can be made from fruit or vegetables. He wants chicken coulis– how many hundreds of vegetable– or fruit sauces, can there be for chicken coulis?

So I returned to my student and asked what kind of chicken coulis he wanted… carrot, tomato, maybe raspberry? He’s looking at me with blank eyes. “The chicken one.” Well, what does the sauce look like? “It’s orange.” Carrot-based? I request he brings his favorite coulis recipe in so I can look it over.

So the next day he brings it in and what is it…? Curry. Curry! It’s curry said with a French accent! Courghee. I say to him, “if you’re going to say a word in French, make sure it’s a French word!”

So last week this student was proud. We made our own curry spice combo from scratch, mortar and pestle and all, and as his day in cooking class approached rumors spread on how amazing this chicken curry we were making was. “That’s because it’s my recipe,” he would respond.

Actually, his recipe called for pre-made curry powder, but I didn’t tell him that. I did tell him what I’m telling you, that about 95% of my students were engulfing our chicken-chickpea curry.

And what goes better with curry than coconut? The week before our chicken curry my students were rolling out coconut macaroons. And yes, we had some confusion from my French student who loves macaroons and thought we’d be baking up the French version. Au contraire.

We were rolling coconut macaroons for Passover (they can pass for a delicious Easter “eggs” too tho), but with flavor indulgences that usually come with the French version. The result? Total love. You know you have a hot recipe when students refuse to leave the classroom until you’ve promised them the recipe. “But you’ll get it at the end of the year with our cookbook.” Foot stomped, “now!” Sheesh.

So here they are, rolled out coconut macaroons just in time for Passover. If you make your own, play with flavors as we did in class– the standard chocolate, check. But we also rolled out cherry, guava and green tea. I also made a Mexican chocolate one at home with a hint of cinnamon and cayenne. Bring these to a Passover seder and they’ll be a hit– or just bake them for yourself or even for Easter. It doesn’t hurt that they are beyond simple to make.

Use a whisk to beat egg whites until fluffy and frothy. NOTE: This can be done by hand flicking the whisk rapidly back and forth rather than in circles, no electric mixer needed. The end result should resemble vigorously shaken milk– white and frothy, not stiff or soft curling peaks.

Add remaining ingredients and mix with a spatula until combined. Wet hands, shaking off excess water. Press 1 to 2 tablespoons of batter into balls (these fall apart when rolled due to the coconut shreds) and place about 2 inches apart on baking sheet. Bake 15 to 18 minutes until golden. Let cool 5 minutes on baking sheet before transferring to cool.

These keep about 3 days or can be frozen. Frozen macaroons even taste great– they’re cold on the outside and remain soft on the inside.