Carnival is a worldwide celebration that takes place during the month prior to the religious period of Lent. The latin etymology of the world Carnival comes from Latin caro “flesh”and levare “to lighten.” It refers to going without meat during the month of Lent (although for vegetarians among us this may not seems like such a sacrifice).

While Carnival parades are most common in the Caribbean, across Europe and South America. In the United States, The West Indian Day Parade in Brooklyn that takes place over Labor Day weekend grew out of Carnival celebrations. Mardi Gras parades also take place towards the end of February in many southern cities such as Baton Rouge, Orlando, and New Orleans. 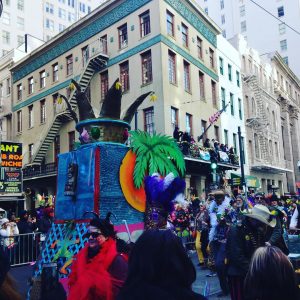 New Orleans is a city with a rich food culture. As Leah Chase, the 93 year old head chef of Dooky Chase, puts it (in an interview with Bon Apétit: “In New Orleans we don’t meet unless we eat.” In May 2016, Ms. Chase became the first African American to receive the James Beard Foundation’s lifetime-achievement award. She was also featured in Beyoncé’s visual album Lemonade, a powerful ode to the superstar’s deep roots in southern culture which we all know should have won the Grammy.

“I always say we changed the course of American history in this restaurant, over a bowl of gumbo. When the freedom writers came to this area they always met here,” Ms. Chase muses. Food is an inextricable element of community and, as such, can be an inadvertent agent of change.

What follows is a vegetarian approximation of Louisiana style beans and rice. It makes no claims at authenticity, but you are encouraged to raise a toast to Chef Leah Chase while you enjoy. For a quicker version, substitute the dried beans for two cans of kidney beans.