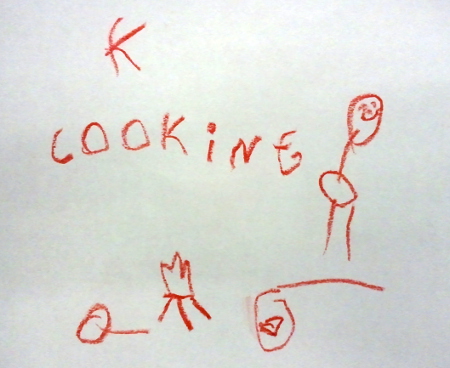 At least he is a smiling pyromaniac in the self-portrait, right?

But that’s not what this post is about! This post is about some amazing Mushroom-Scallion Pancakes. And you’re saying: ‘Eeek gads! My little one hates mushrooms! No way.’ I say to you, trust me, no one, and I mean NO ONE threw these bad boys out in class. They were eaten 100%. Which actually might be a first, because even when we cook something sweet someone thinks it’s too soft, or too salty, or not sweet enough, or…. whatever.

If you were in my class, I might also say, “don’t yuck someone’s yum.”

I’ve made straight, more traditional scallion-only versions of these pancakes in the past, but thought I’d give mushrooms the old heave-ho this year. I have to admit, I was a little nervous going into this class — a known ingredient red flag plus it was parents week. It could go well: “Oh wow, I can’t get little Sammy to eat mushrooms. You’re an amazing teacher.” [Idealized vision.] It could go wrong with a parental unit being the perfect opportunity to throw a tantrum over hating mushrooms, me being an evil teacher that pushes food kids don’t enjoy, and I would have to back-step with a little with some pathetic save like: “Okay, well, we don’t have to try it maybe.” [More likely outcome.]

It also didn’t help that after I mentioned we were making “pancakes,” (with ‘scallion’ and ‘mushroom’ being apparently forgotten words) and the ingredients went down, questioning faces looked up at me: “That’s not syrup!? That’s soy sauce.” No, no, these are savory pancakes– They’re Chinese!

In the end, the tantrum came when a parent helped a child measure flour followed by a few cries of “I can do it myself.” Because while he’s the smallest kid in class, it’s true, he’s been measuring by himself all year and wanted to show off, right?

In the end, I stayed strong and we all made the mushroom version, no one threw a mushroom fit, tho there was plenty of whining: “Mushhrroooom?! I haaaaate mushrooooms. Bleh.” Plenty of my encouraging: “Don’t knock it til you’ve tried it,” and “New form, new flavor.” We pushed through. And we all liked it. Like, really liked it. I was even surprised by this. Even the young adult counselors who aid in my class told me these were “awesome, and I usually don’t eat weird foods.”

The strangest revelation of the week was the difference between my third and fourth grade class– apparently all mushroom lovers, and my sixth and seventh grade class– mostly mushroom haters. Where did this mushroom void occur? I understand it with the kindergarteners, the first and second graders had mixed mushroom feelings, but what a strange gap in taste between the tweens and teens. What happened here? We may never know.

The trick to these pancakes is to chop the mushrooms small. I’m talking adult pinky nail size. The result of which couldn’t be summed up better than by a once proclaimed kindergarten mushroom hater, and artist of the above portrait:

Combine flour and water, stirring until too difficult to mix. Knead to form a smooth ball, adding more flour, about 2 tablespoons at a time if it sticks to hands. Set aside to rest.

Warm 1 tablespoon sesame oil in a skillet over medium-high heat. Chop mushrooms and sauté, about 5 minutes, until reduced. Transfer to a small bowl. Add scallions, cilantro and soy sauce to the bowl. Toss to mix, set aside.

Dust work surface with flour. Divide dough into 4 equal pieces. Roll dough into a circle, about the width of a nickel. Sprinkle 2 tablespoons of scallion-mushroom-cilantro mixture, spreading it out like pizza toppings.

Roll up the round tightly like a burrito, pinching the ends closed. Twist the length of dough three times. Roll the dough twist into a spiral, like a cinnamon bun, tucking the end under. Dust work surface with more flour if needed, roll the dough again, carefully this time so as little filling comes out, into a circle, about 1/4- to 1/2-inch inch thick. Continue with remaining dough.

Heat 2 tablespoons of sesame oil on a skillet over medium-high heat. Add pancakes, cooking until golden, about 4 minutes. Flip and cook the other side until golden, another 4 minutes or so.