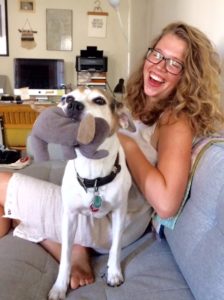 At home with Cricket

Allergic to Salad Program Officer Sarah Carlisle just started listening to Hamilton. She’d never gotten into it since she didn’t have access to tickets (like most of us) but she’s become readily wrapped up in the story.

“It’s pretty easy for me to get into any narrative,” she laughs, scratching her dog Cricket behind the ears between sips of tea brewed from dried herbs from the Community Garden—a blend of tulsi and other herbs, including hibiscus that imbues the liquid with a delicate pink hue.

Carlisle’s own narrative is a compelling one. Born and raised in rural New England (between New Hampshire and Massachusetts), she moved to Brooklyn to pursue opportunities in food education. She has carved out a full life for herself here—starting as an educator with Allergic to Salad in 2015, she became program officer this month. She still teaches classes—including a three hour weekly STEM-based middle school class which she describes as “The most fun part of my week,” but her day to day is now more involved with supporting other educators, answering many emails, getting equipment kits out to schools, crafting curriculum, and disseminating wisdom.

Carlisle is the force behind our STEM based middle school curriculum, which she developed to incorporate more hands on activities and scientific background into her classes. At the ATS educator training earlier this month, she demoed a recipe for seasonal slaw she developed during her work with Kitchen Commons, a food justice nonprofit, in 2015. Recipes like the seasonal slaw allow us to impart valuable lessons through hands on practice with our students—in this instance, waste reduction and knife safety. 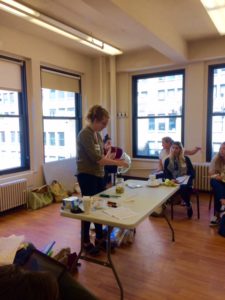 Sarah managed a food cart—Perierra Creperie—for three years in Portland after graduating from Reed College. “I just kind of took over when the business and the business owner were in a sorry spot and by the time I left the position he was able to open two new businesses,” she says evenly. It’s not a brag but a simple statement of fact, validating the hard work and focus that she applies to every endeavor. The nature of ATS’ diverse class offerings and independently contracted educators makes for a lot of moving parts, and Sarah liases between educators and program sites to keep things running smoothly.

She expresses a deep gratitude for this position, a step forward for both her and Allergic to Salad as an organization. “I really like this job, I’m super grateful to be able to do it. It’s  perfect for me right now and I have lots to learn in this position.”

In addition to her work with ATS, Sarah is a coordinator at the Q Gardens Community Garden and helps run farmer’s markets across the city. She rarely purchases produce except through her CSA share and buys dry goods in bulk at the local natural foods store. While she didn’t learn to cook growing up, she did have a garden.

“I remember when I was very small my parents would grow several rows of radishes just for me in the yard. I could plant them because the seeds are big enough for small fingers to handle and then I would just pick them out of the ground and eat them with the dirt still on them. That’s still one of my favorite flavors—radishes and dirt. And I always tell that to kids. This spring I grew so many radishes and used them in all my classes. We’d put them in summer rolls, we put them in salads, sometimes we sauteed the greens.” 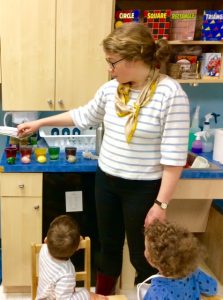 Sarah is also grateful to work for and with women. “I live with my partner who does data analysis for a sports media company. And he gets paid two or three times what I get paid. And he thinks that’s dumb. He’s like, ‘I write about soccer. You feed children.’ But this is the way that we make those changes happen.”

She views her work with food education and food systems as vital to the dismantling of that paradigm. “It feels valuable to do traditional women’s work in a way that is empowering to women and to men and to children and clearly makes an impact on your community, and you get paid for it, and you get recognized for it as a professional. That’s a big deal for me and for the world.”