Some sort of Indian Spinach 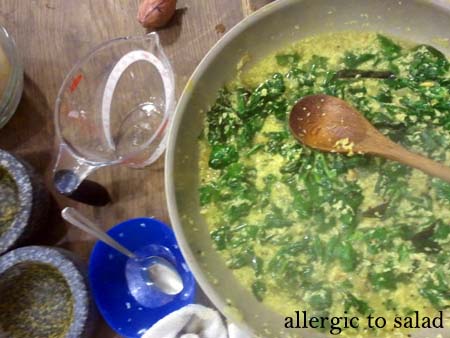 “Ugh! Spinach!? I haaaaate spinach.”
“Yeah, I know,” I respond as my student rolls her eyes, “I thought of you when I decided we should make this!”
“And cheese? Seriously!? I hate that too.”
“First, that’s not cheese. Use your nose. Second, you claim to ‘hate’ everything, yet eat everything, so your analysis of our potential dish has no base in reality.” That confused her to quiet as she attempted to decode what I said.
“Is this salad?!” Another student chirps, “Are we making salad?!”
“Why?” I ask. I can’t really understand the question since the only green on the table is spinach.
“Because if we ever make salad… [insert dramatic pause] I’m never taking this class again.” This, coming from a student who gleefully eats everything we make.

Are we all having a bad day?

By special request from high (my fourth and fifth graders) asking when we are going to start making the Indian dishes I learned and loved while away, we are making my favorite south Indian dish, Palak Thoren. Palak means spinach, but the best part of this recipe is that it is adaptable to almost anything: green beans, cabbage, kale (why not), carrot, mixed vegetables, broccoli, and wait for it…. beets! Seriously, we had a beet thoren that was declared “killer” by a beet-hater. It really was killer– and pink!

On my recent trip to India, traveling around Kerala, I likely ate a variation of thoren at every meal. I didn’t find one I didn’t like, but spinach thoren was hands-down my favorite. The cold winter air sweetens spinach leaves just a touch to bring out the natural sweetness in coconut (no sugar added). I can eat a salad bowl of this stuff, though sadly, in India, when thoren is involved in a meal, you receive a small bowl of it– just a few bites of everything. On the plus side, there were often multiple thorens on the thali (plate), most common was cabbage. Almost every bite of thoren I ate in India I grew giddy thinking of my students and how much they were going to love this dish.

But I’m not, nor was I, in India with my students (thankfully). The sun and freshly macheted young coconut I enjoyed daily does not translate the same to a chilly February classroom of fourteen kindergarteners hating green things. It translates to another day in cooking class we’re not making chocolate chip cookies.

But in real time class time we are having a ball learning how to use a pestle and mortar to crush up our ginger, garlic and turmeric (which we think smells sort of funny and is fun to put all over our face as dye.) We spend some time crying over onions (that I chop but they still can’t get near) and as the coconut oil is warms and the smells are released there is excitement. This stuff smells too good not to try– even by spinach haters.

One kindergartener says he “doesn’t know how I’ll ever stop eating this.”
Most of them though, had mouths too full of palak thoren to talk.

As I returned the kindergarteners to their classroom they bounced around the hallway. “What did you make in cooking class?” A curious onlooker asks.
“I dunno, some sort of Indian spinach.” She said with a smile, “It was good.”
Close enough.

NOTE: I’m raising funds to offer free cooking classes open to the community in my neighborhood. Make a tax deductible donation now! (On February 14, 2012 all donations will be matched.) Head to ioby.org to donate!

In a pestle and mortar, or spice grinder/ food processor, mash garlic, ginger, turmeric and salt to a paste. Warm coconut oil on medium-high heat in a saute pan. Add shallots and saute 2 minutes. Add ginger-garlic paste and saute 2 minutes to release aromas. Add spinach, coconut and water. Cover pan and bring to a boil. Reduce heat, stir and simmer without top until spinach is fully wilted and coconut has absorbed most of the water.