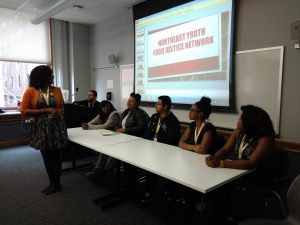 Advocate Jennifer Ramo of New Mexico Appleseed had a very straightforward approach to the question of whether any student should be denied school lunch. “Feed these children first and then let the grown ups sort out the finances,” Ramo stated in an interview on NPR.

New Mexico is the first state to pass legislation barring “lunch shaming,” widely reported instances where students unable to pay for lunch were forced to do dishes or even had their food taken away. “This is not a partisan issue. It’s a basic fundamental human issue,” says Robert Hertzberg,  a California state legislator.

Although New York City School lunches come in at a relatively low price of $1.75 per day, currently, less than a third of New York City Public Schools offer free lunch to their students, regardless of income.
Middle Schools in Staten Island already offer free school lunch, and have since 2014. Staten Island Borough President James Oddo was joined by the presidents of all five boroughs in composing a letter urging Mayor Bill deBlasio  to adjust the budget to fund free school lunch in schools citywide.
At a presentation by the Youth Justice League, a project of Community Food Advocates at the Just Food Conference on March 12th, youth leaders delivered a powerful argument for the positive impact implementation of UFSL would have on students. The system currently in place is not only ineffectual and inefficient; it unfairly discriminates against students coming from non-English speaking families, and reinforces racial and ethnic stereotypes. Students are given a paper enrollment form to bring home to their parents at the start of the school year, and if they miss the enrollment deadline or fail to complete the form, they may be denied free lunch until the next cycle. Enrollment is based solely on household income, a figure which many students may not know or may feel ashamed to ask their parents.
This bureaucratic jumble translates into a toxic lunch time environment where the “poor” or underprivileged students are forced to line up to receive free or reduced price school lunch, while other students go out to eat or bring in their own food. This creates a dichotomy where students who receive lunch are put on display, often reinforcing unfortunate stereotypes. While the availability of universal free school lunch would not mandate participation, and certain more well-to-do students might still go out to eat, a November 2016 report by Community Food Advocates found that participation in school lunch increased by as much as 20% when UFSL was offered.
We at Allergic to Salad are concerned with this issue since it affects all of our students in some way. Since we strive to educate our students on the importance of nutrition and the rewards of cooking, advocating for available nutritional meals is a natural extension of that philosophy. Visit https://www.lunch4learningnyc.org/ to learn more and see how you can get involved.