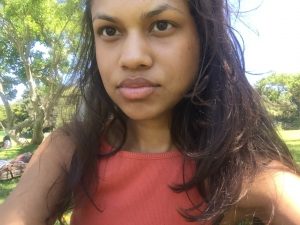 NY native Pia Rahman teaches eleven year olds at Pelham Academy in the Bronx. What led her to Allergic to Salad was a burgeoning interest in holistic health.

“Nutrition is my second career,” she says. “I’m in the works of becoming a registered dietician. A nutrition class changed my way to communicate, to understand human beings and behaviors. I feel so fulfilled with it. I learn so much about myself and other people.”

Her students were initially a tough crowd. “We’re not gonna have any meat?!” was a repeated question when Pia started teaching in February. “They’re still trying to wrap [their heads around] this idea of having a meal with just vegetables,” she explains. But only two months later “They don’t ask about meat the way they used to.”

Pia attributes this change to an exposure to unfamiliar ingredients, and the modeling of teachers and administrators. “Kids won’t do what you say, but they’ll do what you do.” She explains. Even hearing adults talk positively about vegetables can have a powerful influence on their attitude towards trying new things.

She find that her students also enjoy the physical activity of cooking. When there are vegetables to be chopped or cream to be whipped, “everyone wants to be involved.” Acquiring skills is a huge part of any cooking class, and can sometimes be more appealing to students than eating the finished product.
In a feedback survey Pia conducted with her class recently, some students still demanded pizza and pancakes and expressed a hatred of vegetables. Other responses were more moderate. “I don’t like vegetables except cauliflower and carrots.” A few were overwhelmingly positive, such as this philosophical response: