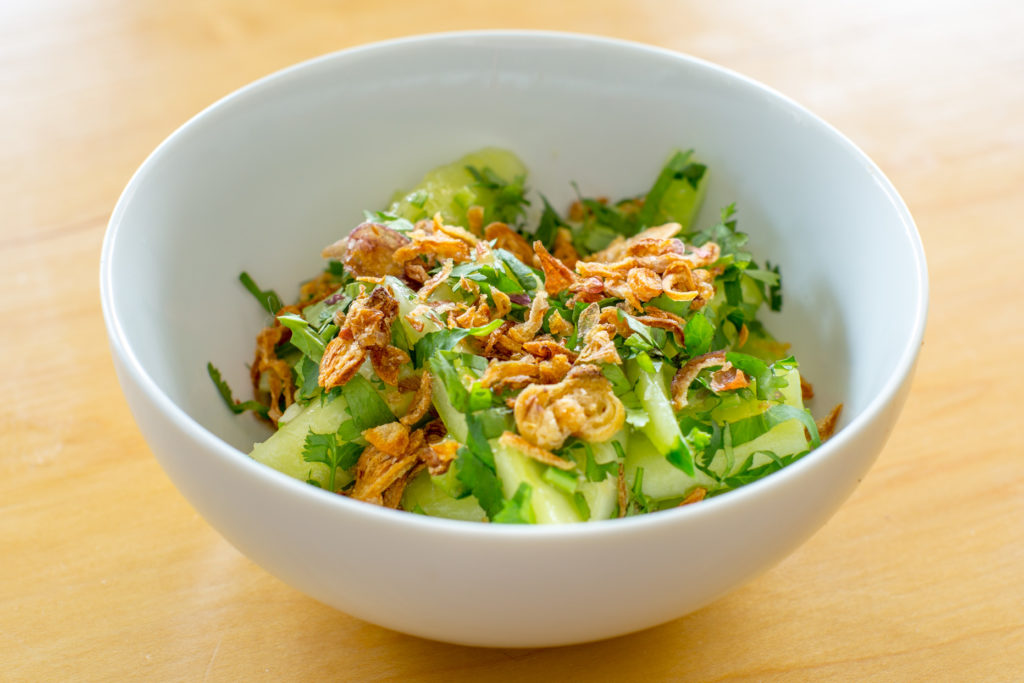 These marinated cucumbers were featured in Bon Appetit (click for recipe)

Utterly unassuming, Win Son blends in with the bodegas, used furniture shops and chinese restaurants that pepper every corner of this bustling stretch of Graham Avenue on border between Bushwick and Williamsburg. An array of Brooklynites assembled for weekend brunch might be the only thing to tip you off that this restaurant caters to more than its immediate neighbors (although it makes a great neighborhood spot as well and the staff have been known to frequent the Chinese takeout place across the street).

Owner Josh Ku is Taiwanese, but he didn’t grow up eating the food of his ancestors. It was only as an adult that he became obsessed with tracking down quality Taiwanese offerings, and this hobby transformed into a calling when he met Chef Trigg Brown. The two traveled Taiwan together, sampling different dishes and tracking down their favorites. Win Son was born from that bromance adventure, and now the rest of us can enjoy Ku and Brown’s take on the Taiwanese food they 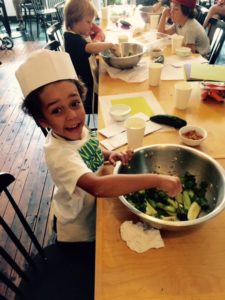 There’s a reason that Win Son has recently caught the eye of Bon Appetit, Grub Street, and the Infatuation, amongst others. Their food and atmosphere, while unassuming, are thought out and genuine to the bone. They are not trying to be authentic; rather, they are presenting their take on a cuisine and culture they love and that enthusiasm spills through at every turn.

This enthusiasm was evident when Chef Brown taught a group of our students (ages 4-8) how to make his signature Marinated Cucumbers on Thursday, September 21st. The recipe itself is simple, but Chef shared his tips and tricks with us, including salting the garlic so you can slice it smaller, coring the cucumbers, and including cilantro stems in the mix. Our kids did all their own chopping and got to sample some seasoned cucumbers at the end of the lesson, as well as going home with a pint container full of cucumbers that were still marinating. 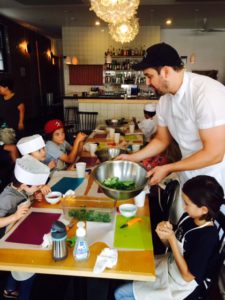 The Chef explained that the cucumbers are often best if left to sit for thirty minutes or so, enough for the salt they get tossed in to do its work and start releasing the moisture. Once that’s started to happen, you can pour off some of the brine and then use it to re-dress the cucumbers to taste.

One of the ingredients used is a controversial one: Monosodium Glutamate, or MSG, which has become a feared term in many American households. Chef Brown explained that he uses MSG (which is derived from seaweed, found naturally in foods like tomatoes and parmesan cheese) to unlock the umami flavor in foods featuring alliums or nightshades. While MSG has been rumored to cause headaches, these claims are unsubstantiated by scientific study, and Brown explains that, just like any seasoning, MSG isn’t meant to be used in excess. These days it is derived from a culture, much like yogurt, and he treats it like a special salt—not a fix all. Regardless of whether or not you agree, these marinated cucumbers are tasty with or without this seasoning!

Thanks to Win Son for opening your doors to us. Don’t take our word for it; stop by to sample some of these marinated cucumbers, and stay for some Vegan sesame noodles topped with crunchy peanuts and scallions or lu rou fan (pork belly served over rice with an unparalleled soft-boiled egg). In any case, don’t be a stranger.